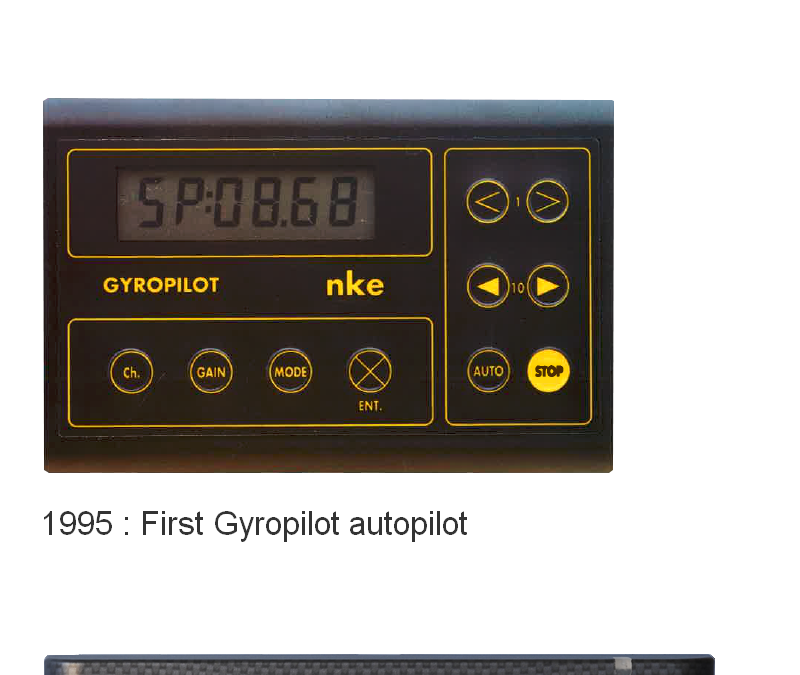 1984:Creation nke by Noel Kerebel
1984: Launch of the nk2 products range, the first CPU integrating a micro control head which equipped most of the Beneteau fleet.
1992: Launch of the Topline range of products which integrates the first Topline bus.
1995: Launch of the first Gyropilot autopilot capable of steering a sailboat downwind under spinnaker. This unit was first installed on Michel Desjoyeaux’s OPEN 60 PRB which won the Vendée Globe Challenge in 1996.
1998: Micrel, the engineering office buys out nke.
2000 : Development of the true wind option in the gyro computer with Michel Desjoyeaux who won the 2000 Vendée Globe on his OPEN 60.
2003: Launch of Gyropilot Graphic Display.
2003: The Figaro One-Design class chooses nke as their equipment of choice for the class.
2004: Vincent Rioux’s OPEN 60 is equipped with a full nke system and won the Vendee Globe Challenge.
2008: Launch of the Processor and the HR Pilot. Equipped with the HR processor and pilot, Michel Desjoyeaux wins the Vendee Globe again, and Thomas Ruyant wins the Mini-Transat and the Route du Rhum!

nke is engaged in strong and lasting partnerships

We share our passion with the racers who have participated in the creation, development and promotion of our products. The races in which they participate are all opportunities to test our current instruments as well as those under development under real conditions.

nke also supports many fleets by building lasting and privileged relationships. Through these commitments, nke assists and contributes to technological development through innovation and safety at sea.

Lastly, the boat builders, our partners for many years, are the true ambassadors of our brand: Pogo Structures, JPK and Alliage.

Our distributors and their teams are working every day for the development and influence of nke worldwide. Special thanks to those who followed us from the beginning of this adventure, Teem Electronics, Pochon, Guervos Luis Michel Milanese, Euro Marine (USA), and Erremme Trade (Italy). Their confidence and lasting commitment is proof of the strong ties that unite us.